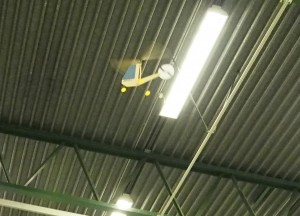 Up and Coming, update to Events
The following has been confirmed since AeroModeller 926 was printed:

24-26 May   SAM35 at the British FF Nats at Barkston Heath
There will be a wide range of SAM35 vintage and retro events for FF, CL and Radio Assist at the Nationals during the May bank holiday weekend. For those contemplating entering the FF rubber and glider competitions, the rules are attached below.

Caption correction for Dave Day interview
Thanks to Jim Mannall for correcting the photo caption on page 49 of the Stunt fliers incorrectly labelled as the 1967 Team Trials.

Jim says, “It is in fact an open event at Hayes, Middlesex in the summer of 1967. I know because I was there! (second from right next to Dave Day). I had first been in the UK team in 1965, and continued as a regular member most years until 1978. Dave Day was a regular competitor in UK national events (was 2nd to him in the 1969 Gold Trophy, having won in 1968, the first of 7 wins over the next 12 years) and was responsible along with myself and a few others for upholding the interest in C/L stunt during a lean time in the early/mid 1960’s. I should acknowledge his encouragement to me as a newcomer at that time. I believe the picture originates from Mick Harvey.” 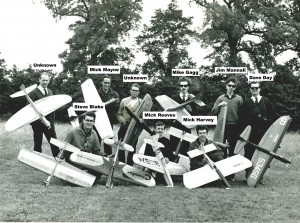 Engines Galore
To whet your appetite – if you haven’t seen the latest edition of AeroModeller (926 March/April 2014), we have a review of the ENYA 36-4C Four Stroke (Cycle) DIESEL engine. Included here is a photo of the engine being run-in which we didn’t have space for in the magazine. 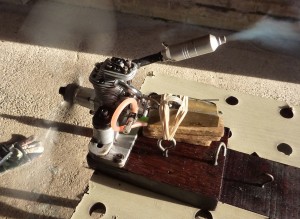 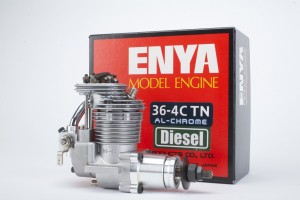 This issue also has Part 1 of the Arne Hende Story, about the master replica engine producer. In the next issue we will have Part 2, including details of the multi-cylinder US engines. As a sneak preview, here is Arne’s twin cylinder Elf reproduction. 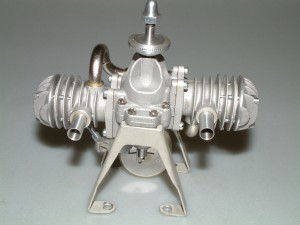 For the F/F Contests the following rules will apply. Start time 10 a.m. Finish at 5p.m. followed by a fly-off if required

1)    Combined contest for 4oz Vintage Wakefields and Midi sized rubber models (above 34” span and below 190sq ins. in wing area), e.g. Northern star, Warring’s Lightweight. These smaller models must conform to the L²/100 fuselage cross section area, and be published or kitted prior to 1951 except for Jan 51 magazine issues.

All models will be required to R.O.G., unless the weather is very poor.

R.O.G.  will be required, unless the weather is very poor.

It has become evident in recent years that problems associated with models flying out of the field (usually an aerodrome) have caused friction between our fraternity and local farmers. This has resulted in what have been called D.T. fly-offs at Middle Wallop which are unpopular. Also the “out of field” flights have resulted in many lost models, with long and difficult searches, even with radio trackers. I feel that Barkston Heath ought to be big enough to contain our activities and so I am introducing an experimental formula which may prove at least an amelioration of the problem, especially for SAM members who tend to be (like myself) of an older generation who would prefer an easier life.

For the two Wakefield events therefore, the following rules will apply:-

2a) For the first 3 flights, the model should be made to land within the confines of the aerodrome. Any means of D.T., including radio, will be allowed. Landing outside will disqualify that flight. If this occurs on any one, and only one, of the flights, that flight may be retaken. Otherwise a Zero score will be given.

2b) The second flight may not be made before 12.30pm, and the third not before 3.0pm. All three flights may be made after 3.0pm. The maximums will be decided upon an estimate of the time to reach the boundary, and will not necessarily be a “safe” time for setting the D.T. This means that 3 flights shorter than maxes might be more preferable than, say, 2 maxes and a zero score.

To allow for changing weather conditions the max may be reset at 12.30pm and/or 3.0pm together with any movement of the control centre.

2c) Fly-off, This must also be kept within the field or the flight will be disqualified.   With the above rules 2a and 2b, a fly-off will be less likely, but will need different skills than is usually the case.

3)   Combined contest for the very small models up to 25” span, and the following, which will be handicapped. The usual rules for the former, i.e. twin leg u/c, 8 in. max.  prop., and vintage in design, will apply.

Ajax, Condor Clipper and Cruiser Pup. The Veron Fledgeling will also be handicapped as it has usually dominated this class and has not been giving the others a chance.

To effect the handicap, the scores in seconds, will have a factor applied as follows:-

Max quoted is before factoring and are the actual targets to be achieved.

The “further rules for Wakes” will not apply in this event.

The B.O.M. (Builder of the Model) rule will not apply to any of these contests.

The total line length is to be 30m, consisting of 22.5m towline and 7.5m rubber strip,    which in practice seems to be 1/8” flat or 3/32” flat. A helper may be employed to both time the flight and hold up the end of the rubber to avoid line entanglements.

The model may be any Vintage or Classic design scaled up or down to 36”  max. span.

4 flights to be made, with the lowest score not counted. A max of 90 secs. will apply unless the weather is poor, when it may be reduced.

A fly-off may be necessary.